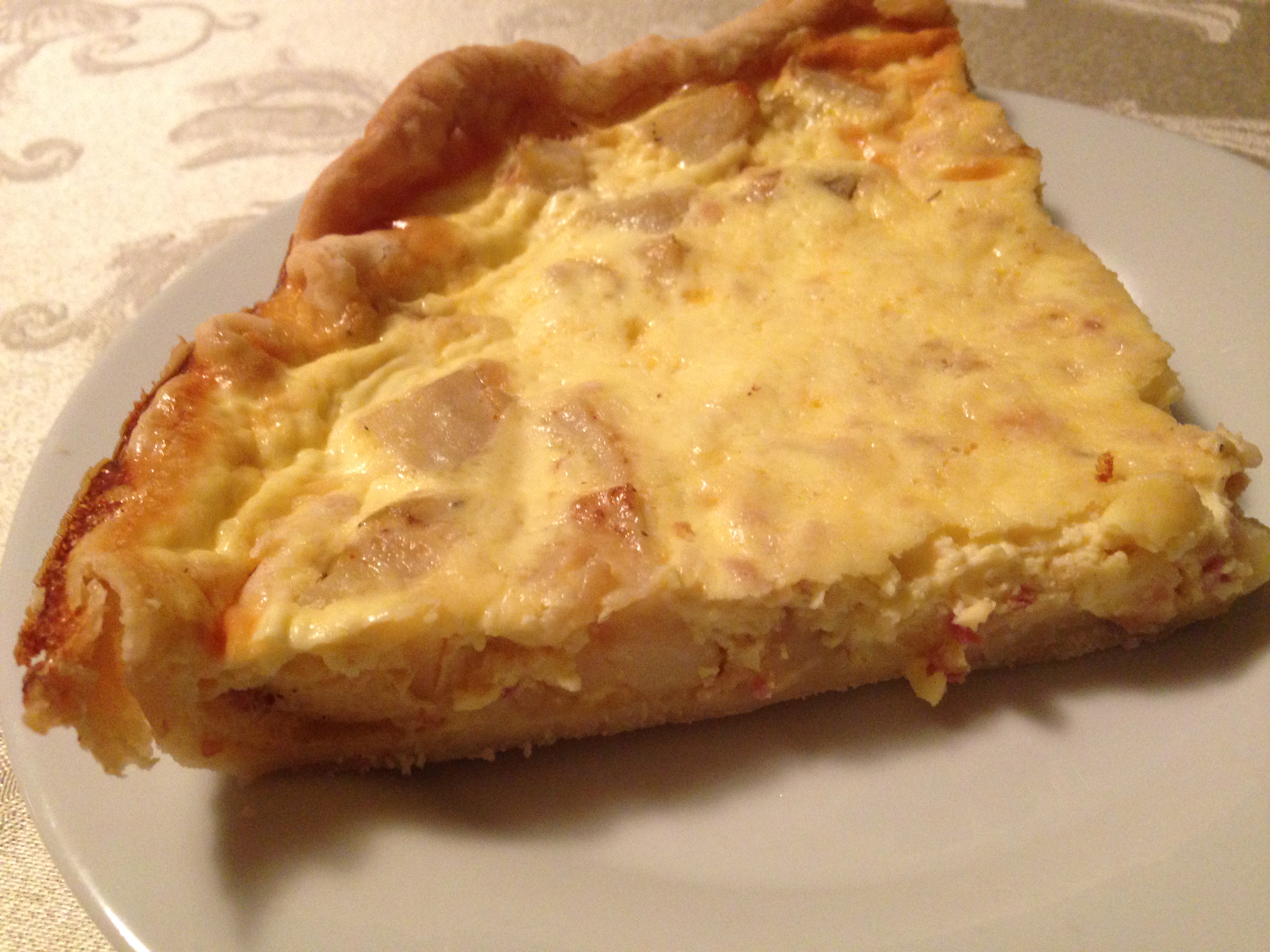 I hate to use any shortcuts that include products that contain preservatives or weird ingredients, but I still haven’t found a quick and reliable pie crust – if you have one PLEASE share it with us in the comments and save me from the Pillsbury dough boy!  I use Pillsbury 9 inch pastry shells for this, they come in long boxes of two and usually can be found near the eggs.

As per usual, I always make two pies at a time, since it takes about the same amount of time and we get two meals from my efforts.  Our favorites fillings* are listed below.  You can use whatever you have left over from the dinner the night before, within reason – it needs to go to well with eggs (pretty much a blank canvass actually) and be cooked already or something that cooks quickly.  Some specific leftovers that work well include cooked ham, broccoli or cauliflower.

Fillings of your choice (also see below)

Preheat oven to 350 degrees.  Take the pie crust out from the refrigerator to come to room temperature (or make your crust if you have an awesome recipe and please do share!)

Peel the potatoes, then cut into little squares.  Heat 1 tbs each butter and oil in a pan, then add the potatoes with onion in small diced pieces (half a small onion per pie).  Add a bit of salt, pepper and paprika to the onions and potatoes, and stir them around occasionally while you prepare the rest of the ingredients.  Keep them cooking until the onions are tender, the potatoes have browned slightly and are basically tender as well.

Grate the cheese and prepare the fillings.  In a large bowl whisk the eggs with the ‘half and half’ and then add the salt and nutmeg.

Put the pie crusts into the bottom of 2 pie dishes, then use your forefinger and thumb to crimp the edges.  Put the cheese in the bottom of the pie evenly, then the toppings next, including the potatoes and onions.  Pour the whisked egg mixture slowly over and between the fillings.

Any one of the following combinations taste great together:
*Cooked bacon cut into in small bits, cheddar cheese (definitely add the potatoes and onion with the bacon, you need the potatoes for volume, the bacon is small but flavorful)

Tip:  I cook 4 or 5 slices of bacon in the microwave until crisp, pat them with a paper towel and let them cool, then throw them into the Cuisinart mini-prep to chop them into small pieces.  Much easier than cutting them!

Tip:  Microwave the spinach for half the time recommended on the box, then take the spinach out of the box and put it into a clean dish towel.  Squeeze all the water out of the spinach and then add little pieces of spinach evenly around the pie.  I usually use half the frozen box per quiche.

Some other ideas for fillings are anything you would put into an omelet like cooked sausage or diced bell peppers for instance.

The eggs will expand upon cooking. To be safe put the pies onto a cookie sheet in case there is any spillage.  Bake the pie until it is firm to the touch like set Jell-O, about 45 minutes (I always check it around 30 minutes).

Cool the pie for at least 15 minutes before slicing.  Leftovers the next day taste great too!  You can make them the day before a party and then just warm them for 15-25 minutes in a low oven once the guests start arriving.  This is one of my only vegetarian meals when I make the mushroom or spinach variety, so it is a good addition to a cocktail party as a meatless appetizer.

It is also a great breakfast for Christmas morning (I can make it the night before instead of trying to actually cook during the chaos of opening gifts!)