This chicken is not only moist and delicious, but the aroma that fills the house gets the family excited for dinner…scents of clove and cinnamon, really nice!  I took a recipe from one of my zillion cookbooks (Lidia’s Favorite Recipes) and adjusted ingredients to fit our taste and pantry, and changed proportions so I could feed all 5 of us with leftovers for later in the week.  I always encourage my kids to be adventurous in the kitchen, embracing our cultural background (or other cultures they are inspired by) and favorite flavors.  Cooking is much more forgiving than baking, so it is easy to be fearless and make sure your family tastes the love!

3 medium parsnips (why do parsnips always seem so limp and lifeless?)

2 large russet potatoes (I just decided to add these next time!)

1 beer (I used a Belgian white beer, but any you like will work)

Preheat oven to 400 degrees.  Clean peal and cut the onions, carrots, parsnips and potatoes.  The onions you should cut into 4 large chunks, the carrots into 2 or 3 long chunks and take the parsnips and cut the fat end into 3 long pieces and then the thin end into one long piece.  Cut the potatoes into large chunks similar in size to the onion chunks.  Take the sage leaves and bundle them together, roll them up and cut strips. 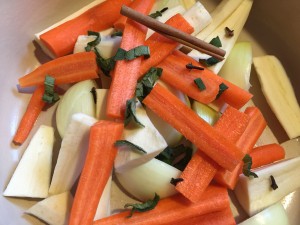 Scatter the veggies, sage, cloves and cinnamon into the bottom of a Dutch oven or roasting pan.  Sprinkle 1 tbsp of salt all over the veggies.  Rinse your chicken, remove the gizzard and neck (gross I know), then pat dry and brush the top with the butter (melt it first in the microwave for 30 seconds), then season all over the outside and inside with the other 2 tsp of salt.  Lay the chicken on top of the veggie mix, pour on the stock, beer and cider and bring to a simmer over medium-high heat on the stove. Cook for 10-15 minutes to get the liquid boiling.

Stick the Dutch oven or roasting pan into the middle rack of the preheated oven (no lid) and set a timer for 30 minutes, basting with the lovely juices every so often.  Check the chicken, if it is getting too dark you can add an aluminum foil tent, but I didn’t need to on mine.  My bird was just under 8 pounds and I cooked it for another 30 minutes, checked it, and it wasn’t quite done.  I then checked it every 5 or ten minutes until the little white timer popped (or else you can use a meat thermometer, 165 degrees in thickest part of the breast).  Mine took about 1 hour and 15 minutes in total, until perfectly roasted!

Serve with all of the lovely roasted veggies, remove them with a slotted spoon.  Then remove and toss the cinnamon sticks and cloves from the sauce, ladel off the fat from the top and make a quick gravy by adding some ice cubes to cool it down and then adding in Wondra flour to thicken.