My eldest son invented this recipe.  One day at the grocery store he noticed that you could buy potatoes in 3 colors, so we bought a bag of them and came up with a recipe for them together.  They look like red, white and blue colors on the skins, so we thought that was pretty patriotic.  It being summer, our garden had lots of herbs ready to incorporate into our new dish, so it was a no-brainer.

Salt for the water

Ground Salt and Pepper to taste

Zest of one lemon (optional) 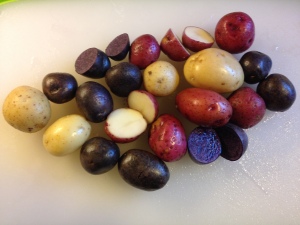 (I use half lemon thyme, half leaf parsley, maybe a bit of rosemary.  Could also use fresh oregano or fresh regular thyme, either would also go nicely.  In the winter you can use a dried mix like Herbs de Province)

Clean the potatoes (but don’t peel them or you lose the nutrition and the nice red colored skin).  Slice the potatoes in 2 pieces unless very large than in 4 pieces.  More surface area will allow for more caramelization and crunchy bits.  Put them in cold water in a large pot (in the pasta insert if you have a steamer pot) for 15 minutes.  Salt the water, start the burner on high, keeping the lid on the pot to get it to a boil, then remove the lid and set a timer for 5 minutes.  Check the potatoes for doneness – they just need to be a bit soft, but still have a bite to them.

Drain the potatoes then put them in a large boil, drizzler half the olive oil over them, add salt and pepper to taste, and the zest (while the potatoes are still hot).  Toss well.  Heat a large skillet and add the other half olive oil to the pan.  Once it is hot add the onions and salt them, cook for 3-4 minutes until translucent, salting the onions.  Then throw in the potatoes and the butter.

You need to cook them to make them brown only, but it takes a bit of time so don’t stir them too often or they won’t brown properly.  Once most potatoes are browned they are ready and can be served immediately, sprinkle on the fresh herbs right before serving and toss them around.

This is a win-win recipe: it is healthy, simple to make, and tastes good 🙂

I’ve made a few variations of this recipe (part of some extravagant breakfast for the boys) and it has always been a hit. I love the addition of shallots! I don’t always have them around so I often use sweet onions (and/or occasionally green onions) and I saute them with a variety of sweet peppers. I’ll usually add some of the onion-pepper-herb mix to eggs (with or without cheese) for an omelet. This is great with fresh baked bread!

Great ideas, thank you! I just saw on a cooking show where the chef took some Italian sausage out of the casing and cooked it with the onions and peppers, and once it was browned then added in potatoes to make a very flavorful hash. I will try that next time I make a big breakfast!